Why architecture? Why the sky?

“Ordinary things contain the deepest mysteries. At first it is difficult to see in the conventional layout of a contemporary house anything but crystallization of cold reason, necessity and the obvious, and because of this we are easily led into thinking that a commodity so transparently unexceptional must have been wrought directly from the stuff of basic human needs. Indeed, practically all housing studies, whatever their scope, are founded on this assumption. ‘The struggle to find home’ ‘and the desire for a shelter, privacy, comfort and independence that a house can provide are familiar the world over”

Robin Evans, Figures, Doors and Passages in Translations from Drawing to Building and Other Essays

There seems to be no place to draw “life scenes” on architectural plans. The human figures – if present – are mostly just an “indication” of something practical, like a scale for instance (“cold reason, necessity and the obvious”).

In painting architecture might be a frame to place figures on canvas; it can contain figures, inscribe them in a symbolic background, divide and hierarchize them, like in in medieval frescoes. From renaissance, human’s portrayal can exist despite from painted space.

But the most interesting situation – to me as a painter – happened in between those conventions. I first found it in Flemish master’s paintings of churches interiors, when analysed a painting of Emanuel de Witte. 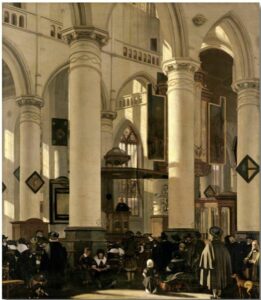 How impressed the dissonance can be between the natural presence of humans in depicted space and the imposing presence of architecture itself!

The more separate they are, the more they reflect each other’s perception.